As a former PE/Sport Science lecturer, I think the iPad is a wonderful tool.

One problem with the default camera app on the iPad or iPhone is there is a time lag between pressing the button to take a photograph and the photo actually being taken, which in the world of sport is annoying as the action you wanted is often missed.

One app that I am finding really useful which overcomes this problem is Burst Mode – https://itunes.apple.com/gb/app/burst-mode-high-speed-camera/id393131664?mt=8. What this does is take a set of photographs in rapid succession, you then go through the set of images to select the one or ones that you want to use.

The image quality is superb, even in the relative low light of sports hall settings, and you can choose various settings including:

If you use the delay between pictures you have a range of options between 0.5 seconds and 5 minutes, it is a shame there isn’t a smaller increment (e.g. 0.1 seconds) which would be more useful for carrying out scientific movement analysis, however If you have no delay, the frequency of capture will be very quick – but will vary depending on the situation (e.g. low light will take less photos). This is not as accurate as a specialist camera or software – but with it being cheap and easy to use, means that each student can use it – rather than just one at a time.

If you do want to use the system to work out speeds of movements, you would need to know the frequency that the photos are being taking. It doesn’t give us this information automatically – but one way round this is to either have another iPad in shot which itself has a stopwatch running – or immediately before capturing your action, you capture another device (I often use my phone for this) that has the stopwatch running – then you can estimate the time gaps between frames. This is always going to be an estimate – but for a teaching perspective is adequate.

There are various other similar apps out there – with a range of prices, and there may be one better than this, but of the ones that I have tried I have found this to be the easiest to use, with the best quality of image and well worth the cost. Some people will tell me that I could just use the video tool, and then use one of the apps that takes a still image from a video sequence, but I have found with these – the image quality isn’t as crisp – which for sport is essential.

If you want to use an app like Burst Mode – it works very well with the device being hand held – but if you want to use this for more scientifc analysis then I would recommend a bracket to attach it to a tripod – as I discussed previously – https://davefoord.wordpress.com/2014/02/13/device-to-attach-an-ipad-or-tablet-to-a-standard-tripod/

If you work for a school or college, and are interested in me coming in to run a training session on how to use iPads in the teaching of PE and Sport then please get in touch.

I recently learnt a little known iPad/iPhone trick – that is really useful, especially for people using an iPad in a teaching and learning situation. 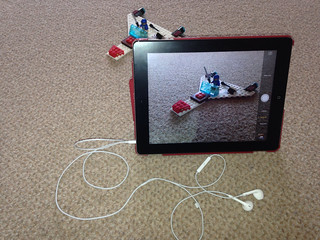 There are a few uses of using this technique as follows:

There will be many other uses that I haven’t listed here (maybe people will comment if they can think of any).

In my previous 2 posts I have talked about:

Adding a file into a content area in Moodle 2

Another consideration when using files within any VLE system, is there is now a strong case to upload content in more than one format to take account of the fact that there are many different systems out there, and not all file types will be accessible from all computers or mobile devices.

e.g. a word document if opened on something like an iPhone or iPad although it will open, the layout and formatting may be changed and may make it unusable. If the word document is only ever going to be read and not interacted with by the learner, then the sensible thing is to save the file as a PDF – which will work on any device and will appear exactly as you want it. If I want the learner to edit the document – then I upload in both Word format and PDF format.

Again PowerPoint does not always work well on a non-microsoft device. If the presentation is very static with no animations or enhancements, then I will save this as a PDF and upload in that format instead. If the PowerPoint does have things like animations then I will upload this as a PowerPoint show – so that those with PowerPoint have the benefit of this functionality, but I will also upload a PDF version immediately below it – the animations won’t work, but they will be able to read the content on the screen – and if the presentation is well designed then they will still be able to access all of the information. Hyperlinks within PowerPoint will still work when exported as a PDF – although is complex hyperlinks have been created from non-rectangular shapes, then these will be converted to rectangles which may reduce the functionality.

This is where using the Adding file type icons to Moodle technique really comes in as it becomes clear to the user which file they want to download.

I have tested this method on various projects and the feedback from the learners has always been really positive.

In my next post, I will talk about another way to add links to files within Moodle.

in April 2011 I blogged about how it is possible to use a service called TubeChop to crop a YouTube video and then embed it into PowerPoint, and this has been one of my most viewed posts on my blog.

I used to use TubeChop as well when embedding a video into a VLE such as Moodle or Blackboard, but have found that it hasn’t always worked, and doesn’t work on iphones/ipads etc as it plays as flash only – so I have found another far more reliable way of cropping a YouTube video before adding it to Moodle, by simply editing the embed code for the video. This technique works really well when accessing videos via Moodle on a mobile device, which I think is going to become a massive feature in the next few years.

There are lots of uses for this technique – often when watching a YouTube video, you don’t want to show all of it, so cropping the bit that you want makes the process more efficient. You can also use videos as part of Moodle Quizzes, either in the question, the answer choices (it using multiple choice) or in the feedback. So if you find a video of something relevant to your area, you can crop it to just play a few seconds – then ask a question based on what the student has just seen, or have cropped videos in each of the answer choices (e.g. question could be which of the following videos shows the correct technique for ….) then show 4 videos clips, with one correct and 3 incorrect.

I am also a big fan of when using video, we need to instruct the learners what they are doing with it – e.g. asking them to observe something in particular, or critique the video, or watch the video then answer these questions… By breaking a video up using the cropping idea, we can easily add these textual instructions between the clips, rather than just dumping a whole video on the VLE for them to watch without a clear purpose.

This technique works really well with anything that allows iframes to be embedded (e.g. Moodle). It therefore may not work with Blackboard (in which case TubeChop may be still required). I also haven’t too date worked out how to get this to work in PowerPoint – so again for that I am stilling using TubeChop.

Last week I took part in an e-learning stuff podcast on the future of flash.in which we discussed in light of the fact that the Apple iPhone and Ipad doesn’t do flash, should we stop using it when creating educational content.

So should we stop using Flash when creating content – or do we keep using it, knowing that some people will have devices that won’t be able to access the content?

When I worked at a University; for the ‘e-learning courses’ – (the ones that were delivered entirely online) when a learner inquired and before they enrolled they were given a minimum specification in terms of what they would need on their computers in order to be able to do the course – and this idea I liked – it then made it easy to create content and check it against this specification, and then be safe in the knowledge that everything will work as desired.

So this could be one solution – to state what types of resources will be used, and what specifications are required to use them – then people can make a choice.

Another option would be for an organisation to stop using Flash, so that the iPad users out there, can use their devices, but how far do we go with this. I use Microsoft extensively in my teaching resources – so some of these resources become unusable on certain devices. However when I produce such resources, I do try where possible to create them in a way that they will work in older version of office and in open office. This isn’t always possible as sometimes there is a functionality in the newer versions which prevents this, in which case I have to make a judgment as to what to do, which is similar to accessibility judgments where you way up the benefits for the masses, against the disadvantages to the minority – can you make an adjustment for the minority, and then decide which technique or tool to use, and I think that this approach is valid for the use of Flash, and I follow these steps when making a decision.

The problem with this model is that it relies on me having not just a good knowledge of the different options available, but also access to lots of different tools to create them. In many organisations they will have a small number of tools to create content, and the staff will learn how to use 1 or 2, and then proceed with them only.

At some point in the future when HTML 5 is mainstream then these issues may go away, but there is such a vast array of existing materials out there, it will take time for this to happen and time for the existing resources to get converted and updated.

Following on from yesterdays blog post where I talked about using a wordpress.com blog for reflective practice I have 2 more screencasts for some of the things that we can do.

The first is looking at setting up a connecting between Flickr and the blog. This is a technique that I use loads – as Flickr is a wonderful source of high quality images, which can enhance my blog posts, and once the connection is set up, is easy to use.

The second technique that I think is really useful, is the ability to post to a blog by simply sending an email. This makes blog posting really easy, can be achieved from any email connected device (including many mobile phones), and can be used by a tutor to create a class blog, that multiple people (e.g. students) can post to.